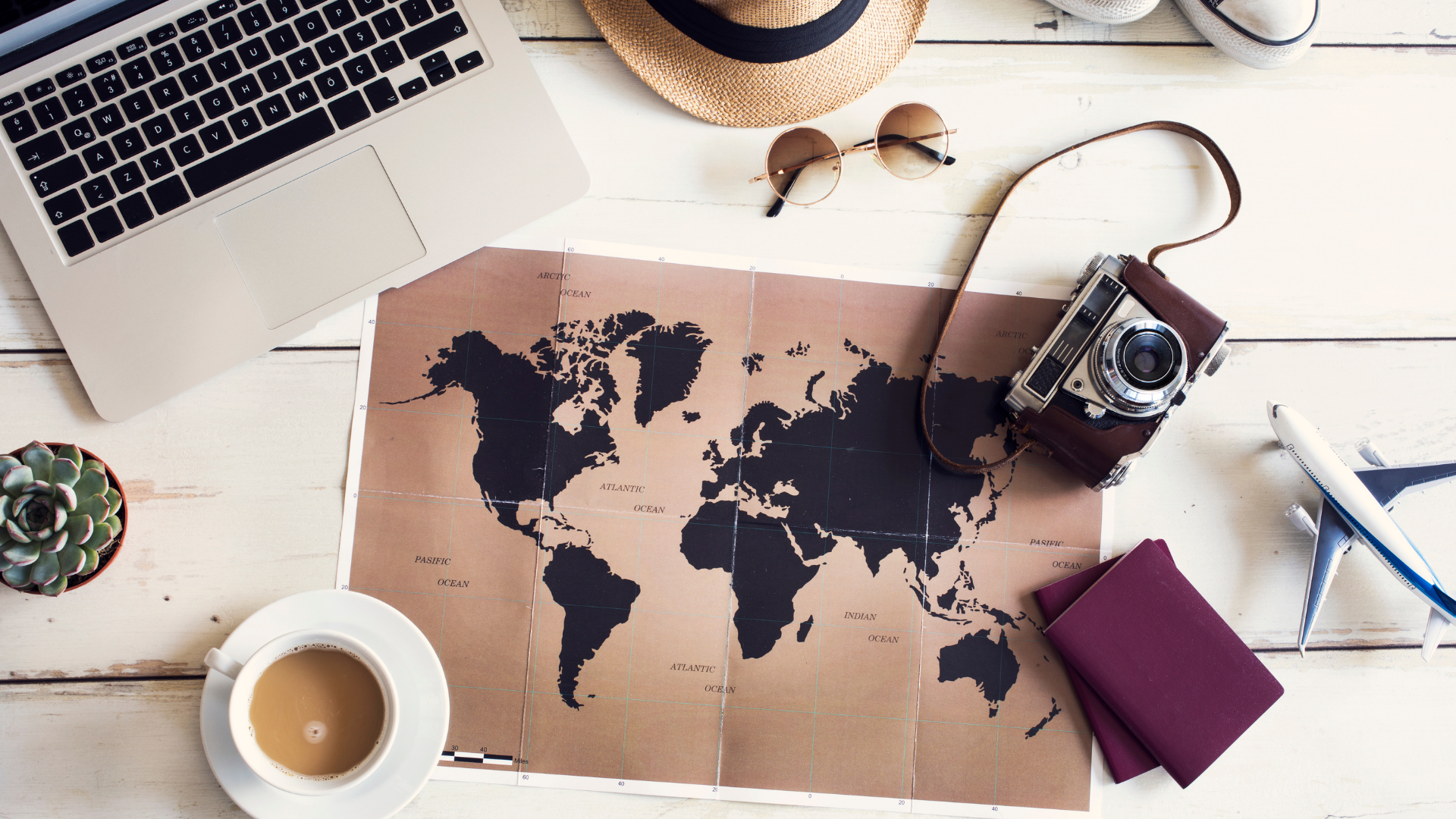 Traveling is exciting, but getting through the airport can be a tedious experience. Do you find traveling and making travel arrangements stressful? Are you confused as to how to go about planning your journey? Never fear, Travel Gooru has got your back. With some strategic planning and adequate preparation, there are many ways to get through the airport quickly. Here are the 10 best travel hacks and tips to try the next time you travel by air.

The best way to travel is in twos or as a couple, if possible, because that way if you opt for the aisle and the window seat in a 3 seat configuration, it is highly likely that other people will forego the middle seat, which, in turn, will give you all the space and comfort possible, without having to share it with a random third person.

Let us be real for a second here, checking-in physically at the airport is nothing short of a nightmare, what with all the people and lines and queues that seem to go on forever, it can be quite exhausting. So, what do you do? Check-in online, of course! Web Check-in enables you to go straight to your gate without having to bother with checking-in at the check-in counter.

3. TAKE YOUR PICK OF SEATS

Another advantage of opting for web check-in is that you gain an edge over those who don’t check-in online in terms of picking the seats you want. Web check-in enables you to choose the seats you would like after consulting the seating plan made available online. Now, is that great or what?

4. GET MEMBERSHIP TO AN AIRPORT LOUNGE

Honestly, there are few things as dreary and draining as having to wait for your flight at the airport. So, if you have to wait, might as well make yourself comfortable. Getting a membership to an airport lounge not only gives you a respite from all the crowds and the commotion, but you also get a whole lot of other benefits such as Wi-Fi access, numerous power outlets to charge your devices, and complimentary snacks!

5. CARRY A BIT OF HOME LIKE COMFORT WITH YOU IN THE FORM OF A CARE PACKAGE

Air-travel can be extremely exhausting and uncomfortable, which is why you should do whatever you can to ensure even the slightest bit of comfort, and honestly, nothing screams ‘Comfort’ quite like a nice little care package of knick-knacks and snacks.

Getting hungry during travels is a very common phenomenon, but thankfully it is one you can avoid by ordering yourself a special meal. Don’t want to spend extra on airplane food? Don’t worry! Just make sure you pick a seat close to the front of the plane so that you are served first.

7. GIVE YOUR SEATING PLAN A SERIOUS THOUGHT

If you are someone who worries a lot about disturbing a stranger every time you need to go to the washroom, or being disturbed by some who needs to keep going in and out, it is best that you opt for the middle seat.

A lot of airlines offer premium seats for a nominal fee. Premium seats give you more space and leg-room which is why we highly recommend that you do your homework before finalizing your seats. It could make all the difference in terms of how comfortable your journey turns out to be.

9. TAKE ALONG LUGGAGE THAT IS EASILY IDENTIFIABLE

Luggage mix-ups are the absolute worst! The best way to stop such a problem from arising is by carrying luggage that is easily distinguishable. It will save you a lot of time and trouble.

We all know that plane fares fluctuate a lot, depending on the day and season which is why it is highly recommended that you set up a price alert on Travel Gooru. We are an online service that can help you keep track of airline fares and help you compare and choose the cheapest flight option available. So, what are you waiting for? Book your tickets with Travel Gooru and save big bucks on your next flight! 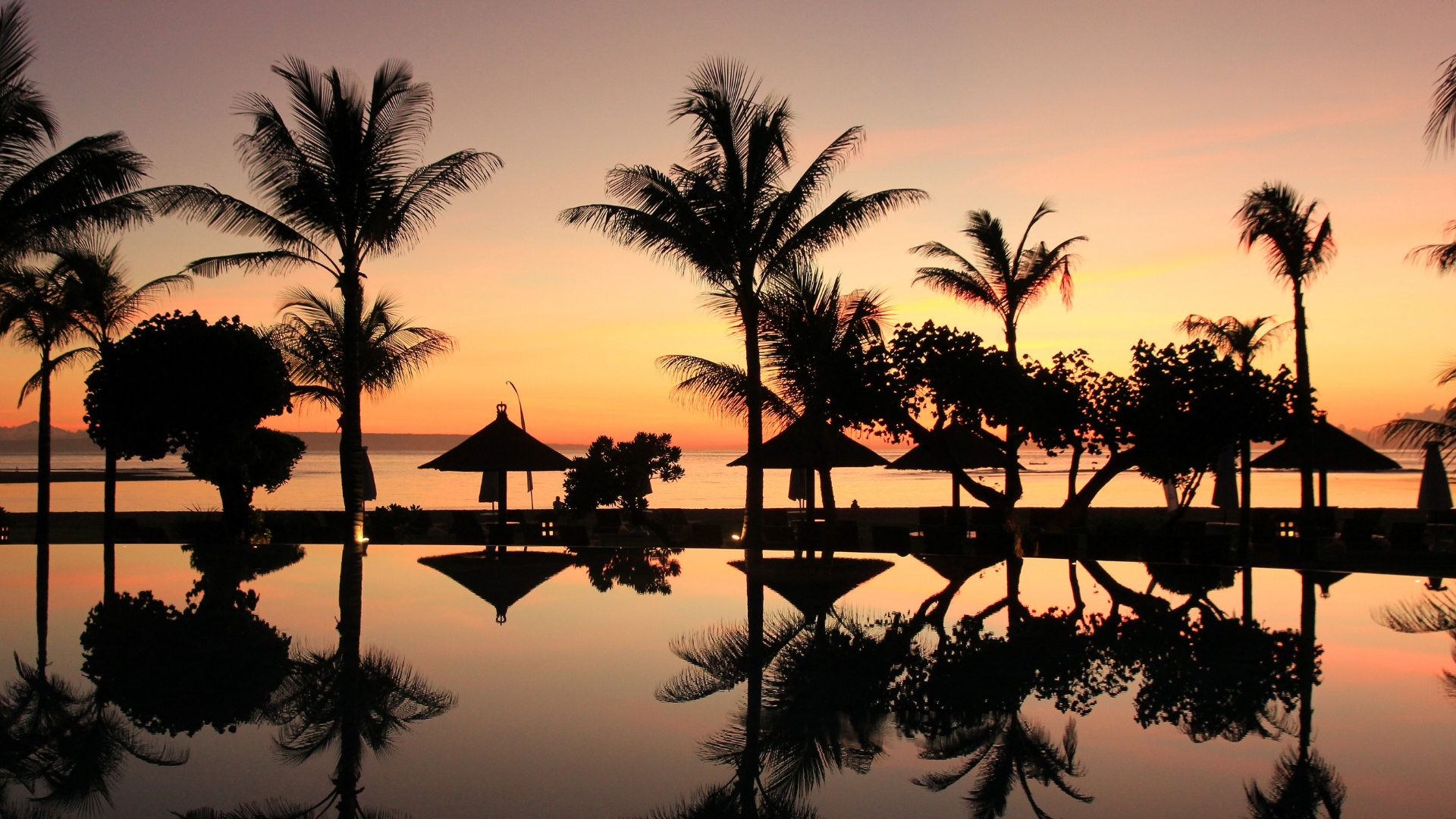 Bali is one destination that is on everyone’s bucket list. A three-week vacation to this place will give you the best experience with hidden gems and perfect combinations. Here is a list of 12 things you must do in Bali:

The Tegalalang Rice Terraces is a valley of rice fields or paddies. These are located north of Ubud and is an incredibly popular location especially during the early morning. This is definitely one of the top things to do in Bali.

This is one of the true gems of Bali. It is a 40-minute hike down to the foot of the waterfall and it leads to a huge waterfall. It is so beautiful and magical that when the sun shines you will most definitely see a rainbow.

This is called ‘the most beautiful place in Bali’ and for good reason. It is a must-visit for it contains white sand, clear blue water, and palm trees at the foot of a limestone cliff. It is the perfect relaxing spot!

This is not in Bali but it has to be on your list nonetheless. The best part about this place is that it is car-less! White sand, blue water, and bikes are your company. You can spend time snorkeling with the turtles and explore this paradise!

5. Stay with a local family

The best way to learn about any place is by spending time with the locals. Stay with a Balinese family and get to know the island for real. Experience how they live their daily lives to be able to really respect paradise. You will surely miss the place and the people once you leave.

You have to make sure to experience the sunrise in the Munduk region no matter what. Munduk is higher up in the region and is the perfect location to view the best sunrise.

In the center of Ubud is a forest where monkeys run wild. The big rainforest gives for a beautiful walk and most locations have monkeys relaxing too. You can feed them to keep them calm as well. Not to worry, there is monkey police which will step in if things get annoying!

This place might sound strange but it has some mind-blowing views. A 40-minute boat ride from the Sanur harbor will transport you to the most impressive views around Bali.

This is a famous dance performance in Bali. It is done by a group of 65+ humans who use vocals as instruments and strengthens the story told in the form of dance. Witness this dance at sunset on a clifftop amphitheater at Uluwatu Temple.

This is a food lovers paradise. Indonesian food, burgers, fusion, vegan, and the best coffee and cakes this place is the best to satisfy all your cravings. You might want to engage in some exercise or yoga but you will most probably be an all-time foodie in Bali.

It does not matter if you are a first-time surfer or a skilled surfer, Bali is the best place to go surfing. Kuta is a spot for beginners and Canggu is for more experienced surfers. Grab a board, get an instructor and you are ready to go!

In the southern tip of Bali, the limestone cliff drops straight down into the ocean. It has a height of 70 meters and the sunset from this location is a must-see in Bali.

If you found this article to be interesting and what to plan your perfect vacation, visit us at www.travelgooru.com. We provide the best flight deals and the cheapest hotels for your getaway. Visit us today. 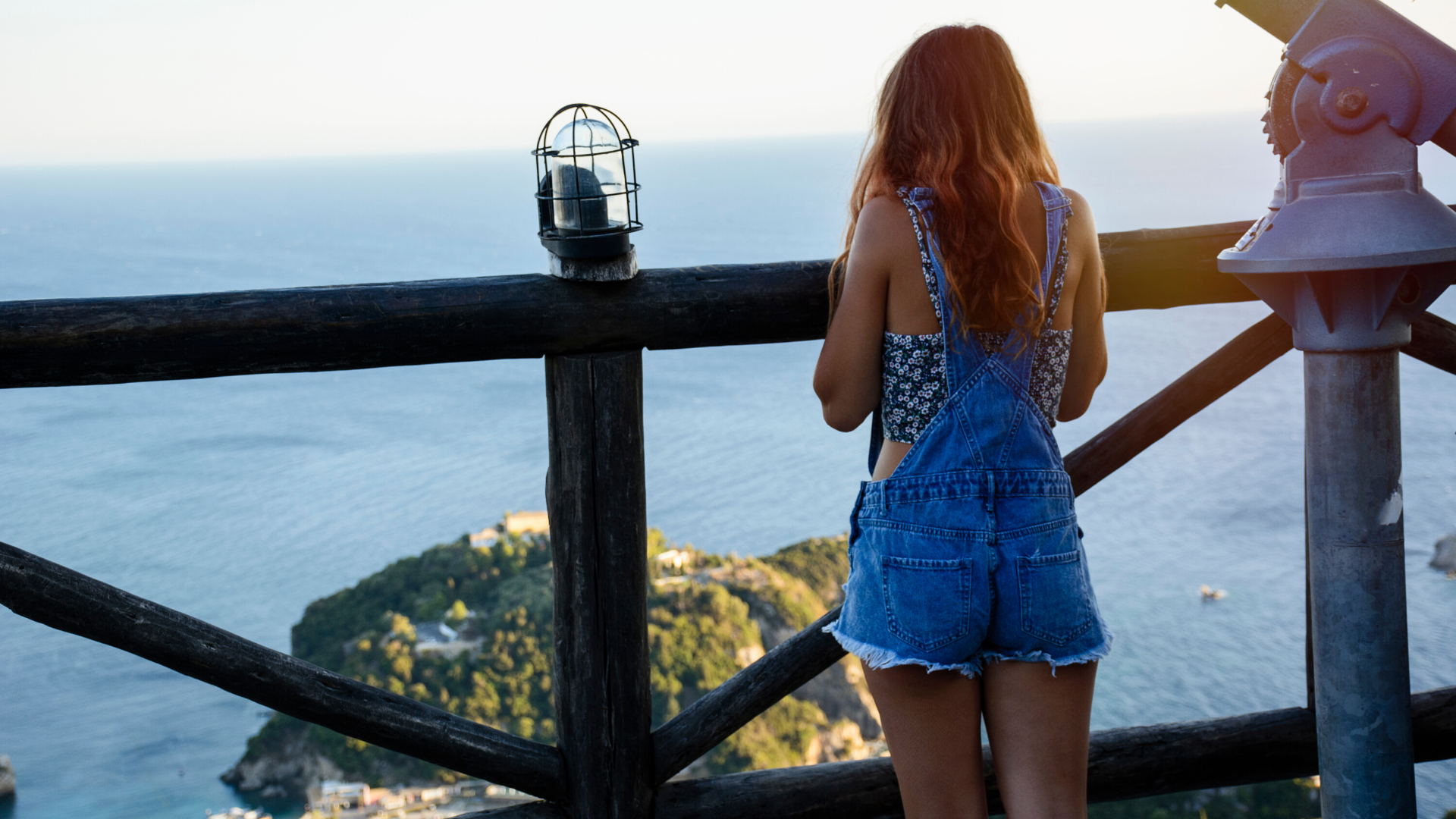 When someone talks about Europe, you might think of it as the smallest continents in the world, but when it comes to the historical and cultural legacy, it definitely is one of the greatest. Thus, it would be prudent to mention that traveling through Europe during the summer is an adventure that offers a mix of amazing activities, like hanging out at the beach, swimming, partying late nights, and also exploring numerous historical sites and understanding about the local culture.

If you feel like going on a vacation to Europe right away, make sure to add these island destinations in your places to visit list because you absolutely wouldn’t want to miss out on them when in Europe.

This island is one of the must-visit destinations on Croatia’s South Dalmatian Coast. The Korcula Town is popularly known as “Little Dubrovnik” because of its churches, medieval squares, and places, while the dense forest and beaches offer incredible scenery.

Corsica Island has the stunning charm to attract all its tourists to its sandy shores from all the corners of the world. With its diverse terrains, geographical features, and a plethora of breath-taking attractions, Corsica always has something to offer to its visitors.

This heavily populated island is a must-visit if you desire to take a peek at the ancient world of Greece. This island was the former focal point of the golden Minoan civilization, who were considered to the earliest settlers that have been recorded. And the best part is that their relics are still there, especially is you visit Knossos and Heraklion, which was said to be the place of the mythical creature Minotaur.

This island is regarded as one of the best islands in Europe for vacation and is so spectacular that even the Spanish Royal Family chooses to spend their summer vacation here. The superb coastline is inundated with numerous beach resorts with varieties of water sports.

This popular island was established centuries ago by the Ancient Greeks. It has been well-known for its stunning beaches and blue sea, but sites like the rock formation Faraglioni, the footpath Via Krupp, and the Gardens of Augustus should not be underestimated.

With its whitewashed buildings, volcanic sheer cliffs, domed churches, and Cycladic-style houses, Santorini is regarded as one of the best honeymoon island destinations in Europe. Full of museums, wineries, beaches, scenic spots, Santorini offers a superb stay that you will cherish for a lifetime.

The island is home to numerous stunning churches and palaces, such as the Town Hall and the Cathedral, and to many species of fauna and flora is Laurel forest. The particular island is a little further than most of the other islands, so you can easily enjoy fewer crowds and a more laid-back feel. The island is also popular for its rich cuisine and exquisite wine.

This island is in the middle of the Atlantic Ocean is an archipelago of nine islands. It’s popular as one of the largest whale sanctuaries in the world. Explore the hot thermal waters, volcanic lakes, and the geysers.

The Hvar coastline is regarded as one of the most enthralling in the entire Adriatic Sea. Apart from all the alluring beaches that it has, the island is definitely a treasure trove of history and culture. It has been a part of Venice for manifold times in the past, and that’s the reason why one can see a lot of paintings by Tintoretto and Veronese in different churches of Hvar.

The island receives a lot of tourists when the weather is warm and the day is clear. A lot of historical sites can be noticed here, such as the remains of the Palaeolithic era. The island took a forward step in its reputation when Queen Victoria and Prince Albert built the world-famous Osborne House.

With this list of Top 10 islands in Europe, you now have a small base for an itinerary. If you desire to see all of these amazing places in Europe, connect with us at Travel Gooru today. We help clients search for cheap hotels and rental cars at their vacation destination. We instantly compare prices and provide precise details to make it easy for our clients.